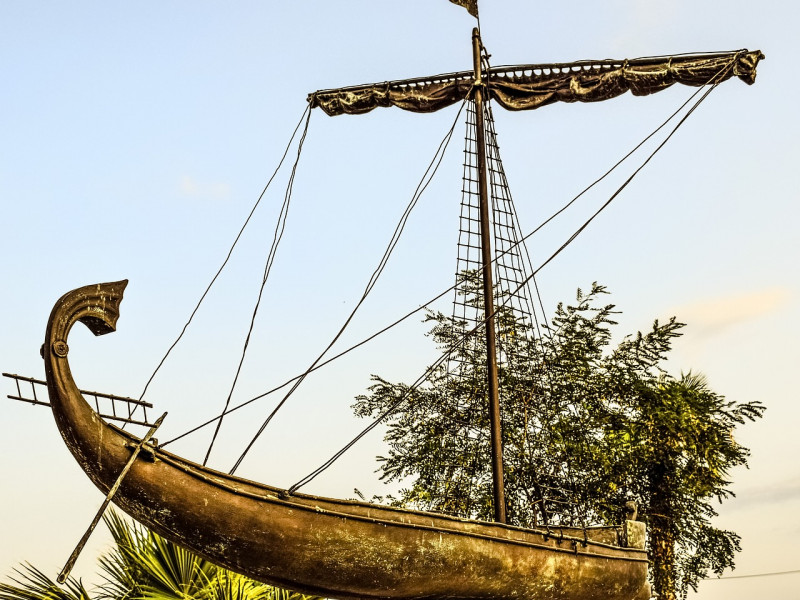 You may know of the Argonauts as one of many school mascots, and you may associate "Golden Fleece" with Brooks Brothers, but the origin of each comes from an Ancient Greek myth emphasizing foresight, teamwork, and facing one's fears.

Years before Jason's birth, the passing king of Iolcus chose his son Aeson to ascend the throne, but it was taken by Aeson's half-brother, Pelias.

As is common in mythic tales, Pelias was told that a descendant of another man would seek revenge upon Pelias for stealing the title of king, and so Pelias worked to kill each of the man's descendants before they could be considered a threat. Aeson was imprisoned, but his life was spared due to the pleas of their mother.

Jason was the son of Aeson and was ordered by an oracle at the age of 20 to head to the Iolcan court, where he encountered an old woman struggling in the water of a river. After helping the woman cross the river, and losing one of his sandals, she revealed herself to be the goddess Hera, who was angry with King Pelias for killing his stepmother after she had sought refuge in one of Hera's temples.

Pelias was warned by another oracle to guard against a man with one shoe prior to attending a sacrifice at the temple of Poseidon with several kings from neighboring territories. He recognized Jason, his nephew, among the crowd, standing with only one shoe, but could not kill him in such a public place.

King Pelias confronted and asked Jason, "What would you do if an oracle announced that one of your fellow citizens were destined to kill you?"

Jason, without realizing that Hera had put the words into his mouth, replied, "I would send him to go and fetch the Golden Fleece." The Golden Fleece was guarded night and day by a vicious dragon in the grove of the Colchian Ares. Pelias, believing that the journey would prove fatal for Jason, sent him to fetch the fleece.

Jason commissioned a boat, called the Argos, to get to Colchis. The boat held up to eighty men and was created specifically for the journey.  There is no definitive list of the crew, called the Argonauts, who assisted Jason on his quest, but this story is unique among Greek myths in that it is one of the few focusing on a team of heroes achieving an objective together.

Among the most recognizable Argonauts are Hercules, Iolaus (his nephew), Argos (the shipwright), Atalanta (a huntress), and Orpheus (a musician). That being said, almost every hero from Greek literature has at one point been associated with the elite Argonauts.

The journey was long, and the crew fought many mythic monsters and encountered a variety of challenges to learn how to reach Colchis and the secrets to pass the crashing rocks which guarded its shores. The Golden Fleece was owned by the king of Colchis, who presented Jason with three tasks to retrieve the fleece, in all of which he failed.

Hera; however, worked in Jason's favor to persuade Aphrodite and Eros to make the kings daughter Medea fall in love with Jason. She offered him assistance in each task, including providing him with a potion to put the dragon to sleep so that he could recover the fleece. Jason fled with Medea, who distracted her father while they set said (he had turned on Jason after the fleece was safely away from the dragon).

Upon Jason and Medea's return to Iolcus, Jason found that both his father and Pelias had become old and frail. Jason pleaded with Medea to return some of his father's youth so that he could properly celebrate Jason's return. When Pelias' daughters learned of Medea's magic, they asked that she do the same for Pelias.

Instead, Medea tricked the women into chopping up their father by promising to mix his body with the same potions used to return Aeson's youth. After effectively killing Pelias, his son drove Jason and Medea into exile in Corinth, where Jason sought to marry a Corinthian woman to improve his political ties.

This resulted in his separation with a heartbroken Medea, who cursed and killed Jason's Corinthian wife, then fled to Athens. Jason later returned to Iolcus, where he claimed the throne by killing Pelias' son, though his betrayal of Medea lost his favor with Hera. He died alone and unhappy, sleeping under the stern of the rotting Argo when it collapsed onto his body.

That story was long, huh? Well, here are some takeaways from the story of Jason, The Argonauts, and The Golden Fleece.

Social Capital is Fickle- With each of his selfless actions, Jason was rewarded with assistance from Hera, Medea, and the Argonauts in the face of the greed and paranoia of King Pelias. Still, good deeds are not always appreciated, something fraternity men often argue in the face of bad news. Jason turned on Medea despite all she had done for him, who then broke her love spell to gain revenge.

As a leader, you will establish relationships and partnerships which will ideally be mutually beneficial. Still, you should never take others' favors or interest in you for granted. Self-interest is a great motivator, and so it is best to avoid creating unnecessary resentment among your peers.

The Dangers Of Lusting For Success - By the end of Jason's tale, he turns out to share many similarities with Pelias, due in part to his lust for power and success. Awards and achievements are nice, but be wary of prioritizing them over your friends and loved ones. Resting on past achievements will leave you unhappy and exposed, shown in this story by Jason's attachment to the Argo, which eventually resulted in his death.

Teamwork Makes The Dream Work - It is safe to say that without the Argonauts and countless figures and monsters encountered on the journey that Jason would never have acquired the Golden Fleece. Utilize the individual talents of your teammates to propel your organization forward, and pay attention to the qualities and talents of potential members to determine how they can best enhance your chapter.