IFC members pay for the NIC. They deserve a vote

Update 2021: This article has been updated for clarity and to acknowledge changes to the NIC model following this article's original publication.

The North American Interfraternity Conference (NIC) is assuming authority over local Inter-Fraternity Councils (IFC) after decades of neglect. There are positive aspects to its plans for IFC's. Namely, a more formal relationship between the NIC and IFC's may shield some of the latter from hyper-active college administrators. Unfortunately, I believe there are as many negative aspects to this proposed structure as there are benefits. In this article, I explain why now is a crucial moment for students to stop following rules and to challenge their inter/national organizations.

Times of transition are times to make strategic plays. If the NIC is going to start billing IFC's directly, and if IFC's become official components of the NIC, then students should demand some legislative power within the NIC.

Inter/national fraternity leaders routinely endorse legislation or pass interfraternal policies at NIC meetings without consulting their dues-paying members. Some fraternities have better, more transparent processes than others. But there is no “Standard Operating Procedure” in how the NIC or its members deal with students (go figure). American colonists fought for independence over this very issue; it is an important one. The NIC's primary streams of income are member dues (members meaning inter/national fraternity organizations), vendor contributions (companies trying to sell products to fraternities), and the new IFC “Campus Support Model” fees. Guess where all of that money comes from? Students.

Undergraduate members pay dues to inter/national fraternities, which then pay dues to the NIC. They pay for services from vendor organizations (directly or indirectly), which then give money to the NIC for preferential treatment. Finally, students pay their IFCs, which will then forward that money to the NIC headquarters in Carmel, Indiana. Before the Campus Support Model, the NIC could dismiss a request for formal representation of IFC's at NIC meetings. The inter/national fraternities, not the students or student fraternity chapters, were the members. But now that IFC's are being billed directly, they have just as much a right to demand a vote.

A fraternity executive and I debated this online a few weeks [before the original posting of this article]. He suggested that students can take their problems to the NIC through their inter/national fraternity. In theory, students of a fraternity could organize a vote that their fraternity’s delegates could then raise at a NIC meeting. That makes technical sense, but it is a clunky and (let's face it) unrealistic way for students to have their voices heard. Fraternity leaders often do a lot of work to make sure only the topics they want to be discussed are the ones discussed at their legislative sessions. Practically speaking, students can directly bargain with the NIC by withholding IFC dues until they get what they want. After all, the NIC has survived without this money for many years.

The proposed benefits of the NIC's Campus Support Model should be questioned.

What do students get out of the deal? Hopefully, they gain some freedom from hostile college administrators. Perhaps the ideological worldview of Fraternity/Sorority professionals will no longer result in publicity-stunt policies like deferred recruitment, community suspensions, or closed expansion processes. Unfortunately, the NIC's proposals just swap one set of bureaucracy for another. When you consider the fact that most IFC's will still be required to report to their Greek Life office in addition to the NIC, it's a lot more cost for little observable benefit.

The NIC's "Standard Operating Procedure" for IFC's should be questioned because the NIC's own operating procedures produce underwhelming results. It's for that reason that 10 fraternities severed ties with the NIC since I first wrote this article. For example, the NIC helps lobby on behalf of fraternity organizations. Fraternity members were promised that the Collegiate Housing and Infrastructure Act had overwhelming bipartisan support and that it would pass with tax reform. But tax reform came and went and CHIA was nowhere to be found. This is par for the course. NIC initiatives typically fall flat after the press release has made its rounds.

The Campus Support Model adds more problems to the mix. Students pay dues and receive discounts on vendor services. The trick is that these vendors all pay thousands of dollars to the NIC for preferential treatment with money they get from selling products to students! IFC's also receive discounts on NIC programs, a dedicated NIC consultant, and an optional strategic planning session. But again, why take strategic consulting from an organization with few observable strategic victories?

Some NIC members do not have chapters in IFCs. Some non-NIC members do. Does it make sense that only some are expected to pay the fees?

Finally, there are many inter/national organizations which are members of the NIC, but not IFCs. Will they be required to take part? How, if not, can the NIC enforce the ideal fraternity experience? One example is the NPHC (historically Black) fraternities which are NIC members (e.g. Alpha Sigma Phi and Kappa Alpha Psi). Those organizations, along with many other fraternities that are members of two or more umbrella associations, will not be required to take part in the new IFC’s. One must wonder why only some NIC member fraternities will be coerced to join the new IFCs and why others won’t.

When I first reported on this issue, the NIC charged $30 per chapter for every fraternity which was a NIC member, and $330 for every non-NIC fraternity chapter on campus. Shortly after I published this article (on 09/08/2019), four fraternities collectively representing 950 chapters issued instructions that their chapters do not pay any additional charges to the NIC for IFC dues. As I previously mentioned, another 10 fraternities representing another 1,000 fraternity chapters severed ties with the NIC in the year following this article's initial publication.

In the fall of 2020, the NIC changed its fee structure from a per-chapter fee to a flat rate based on the number of chapters on campus, but that does not address the bigger issue: non-NIC fraternities are not NIC members for a reason. Their chapters should not be required to pay NIC dues because their fraternity might have been a member at one time in the past. Either give the IFC's a vote or stop pretending that they are components of the NIC.

Additional background: How the NIC and fraternity professionals play puppeteer and call it "student leadership"

I would not be this enthusiastic about students staking their claim were it not for the underhanded ways in which the NIC (and fraternity professionals in general) handles its business. Why do IFCs need insurance? What is the cost of the insurance to the NIC? What will the NIC do with any profit? Where is this six-figure infusion of cash being spent (The NIC stands to add at least $400,000 to its annual budget from the Campus Support Model alone)? Why can’t students get a vote on important policy decisions?

We will certainly hear about how this or that IFC chose to become recognized by the NIC. We’ll hear how student leaders chose to pay more money for no voice and greater bureaucracy.

But take a look at the email in the image below. This quietly orchestrated effort to force students to make a specific policy decision is how the NIC operates. NIC staff direct NIC member organizations’ staffs to influence their chapter officers to vote in certain ways. It’s the same process NIC members use to promote expansion. I was told to facilitate similar conversations when I was the Director of Fraternity Growth. We’d call the chapter president and say, “you have to vote yes because it’s part of the NIC's good faith expansion policy.” 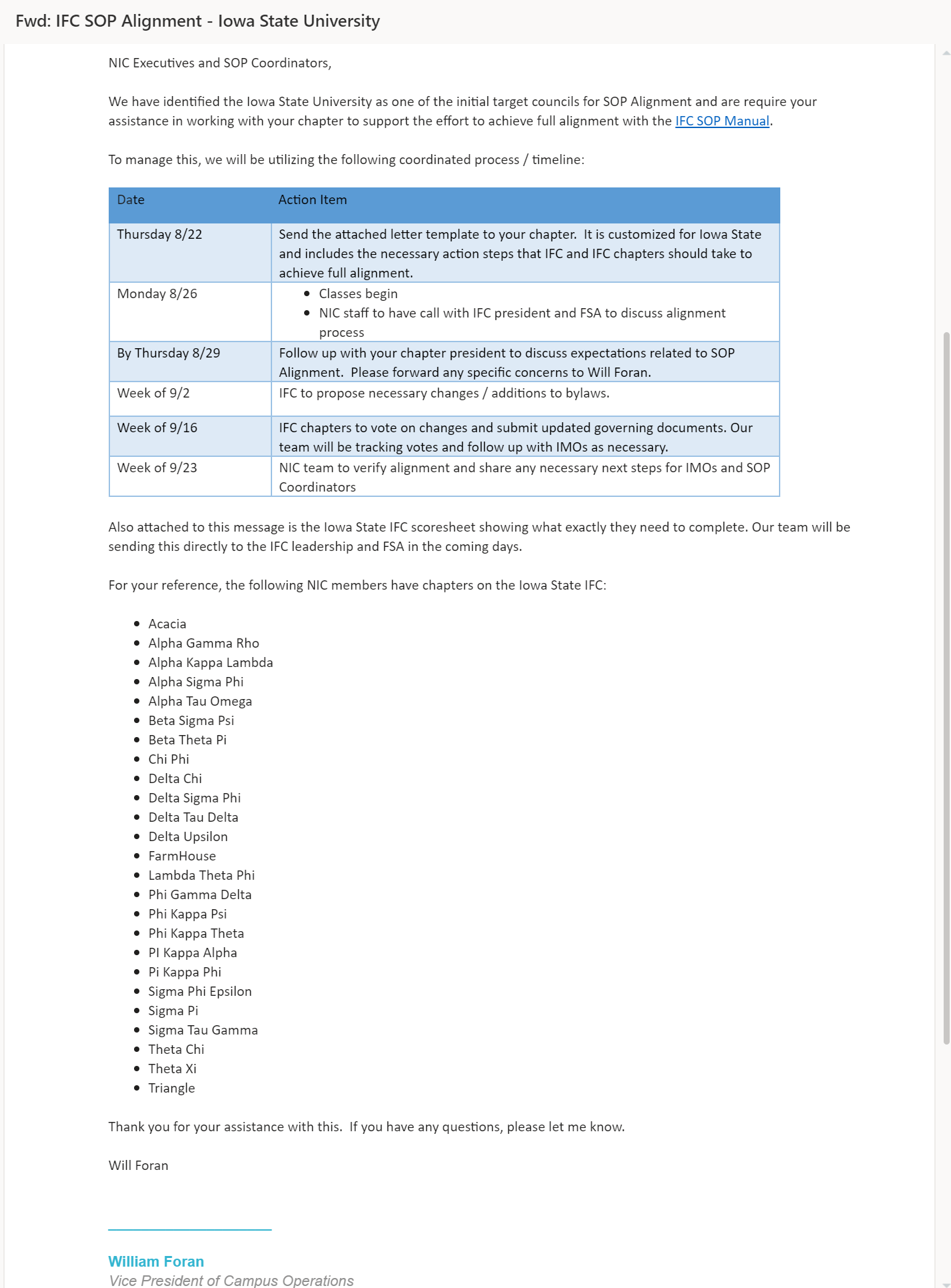 These are not students making decisions, they are students receiving public credit for decisions they were compelled to make. There is an entire outline, coordinated by NIC staff, to ensure that the students adopt the NIC's Standard Operating Procedures by a certain date.

I can applaud the NIC for helping IFC's break away from campuses with anti-fraternity policies (as they've supported at West Virginia University, University of Nevada: Reno, and several others). That said, I have first-hand experience with the way that fraternity professionals manipulate students to get what they want, and the NIC is particularly adept at making grand and empty claims.

Undergraduate college students do not need another bill to pay. They do not need another layer of bureaucracy and another checklist of standards to adhere to. If those things must occur (for some unknown reason) then the students should at least have a say in how things work. Whether or not they have binding votes at NIC meetings, IFC leaders and proponents of self-government need to stand up for students. The NIC is shedding members and has walked back some of the more jarring elements of its IFC dues model.

Unfortunately, IFC Dues, the Campus Support Model, and the IFC Standard Operating Procedures are a step in the wrong direction. The good news is, the NIC has no actual authority over your fraternity chapter or your IFC, so you lose nothing by simply saying "No."