In October of 2018, The Atlantic published an article by Joe Pinsker titled, "Do Fraternities and Sororities Get Better Grades?" (the name of the article has since been changed)

Pinsker wrote that membership in a fraternity does not necessarily improve one's grades and asserts that the higher grade point averages of fraternity members were more likely due to the suspension, expulsion, or refusal to initiate those members or new members with poor grades. "Students in fraternities and sororities do seem to get better grades and go on to earn more money right out of college," he writes, "but this research suggests it's for reasons other than their membership in the Greek system. Their houses may actually be holding them back."

The North American Interfraternity Conference (NIC) and National Panhellenic Council responded with a presser saying that Pinsker's article relied on skewed data from one university and that it was not representative of the big picture. That is true. The statement also suggested that fraternal foundations dedicate $79 million in annual scholarships toward college accessibility. I challenged this point on Twitter, and the release was quickly updated to read, "$79 million in scholarship funds and educational programming funding annually."

A NIC staff member later clarified via Twitter direct message that the $79 million figure was provided by Pennington Co., but that the data from their research was not publicly available. In other words, how much of that $79,000,000 went to scholarships would remain a mystery. Luckily, fraternity foundation tax documents are open to the public. So I decided to look into the tax filings for 29 fraternities traditionally associated with the NIC and Interfraternity Councils (i.e. the historically white groups) to get a better picture of what fraternities are doing to make college more accessible.

Let me start by saying that my data is incomplete. I have not looked into NPC sororities. A glance at Zeta Tau Alpha's 2018 filing shows about $800,000 in scholarships and grants to individuals. Still, even if every NPC sorority gave $1,000,000, the figure wouldn't come close to the $79 million from the press release.

Moreover, fraternities track and report information differently. Two of the groups included in the total figures did not report the number of recipients. Many likely include general grant requests from chapters (i.e. a chapter requests $550 to send a student to UIFI, or something) in their "Scholarships and Grants" section. With that in mind, here is what I found: 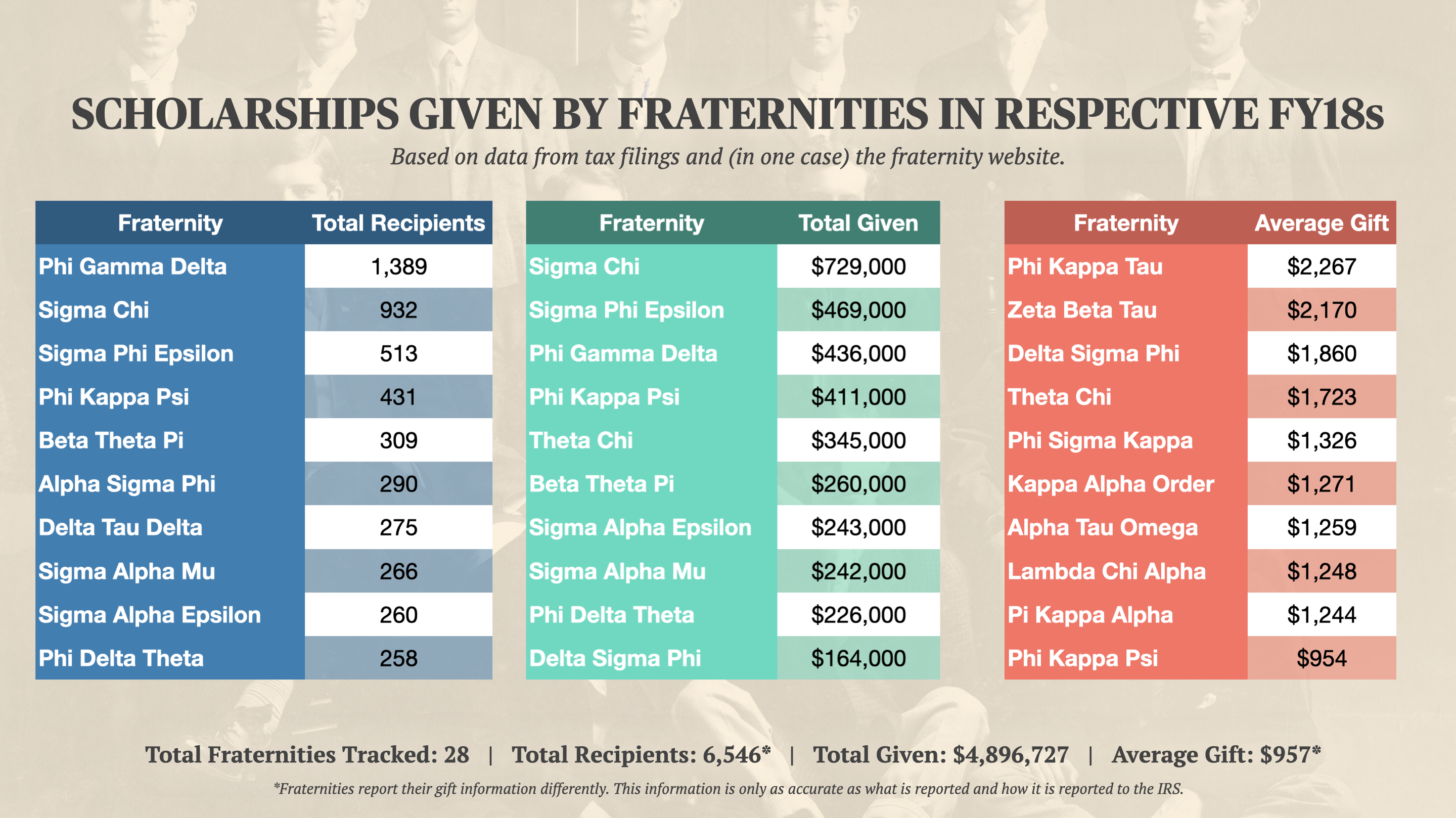 You can see the data for all fraternities surveyed here (it's not particularly interesting). To maintain my sanity, I limited my research to the 30 largest fraternities. Two didn't have the information I was looking for, but we can assume that the 28 remaining groups make up the bulk of academic scholarships and grants following the Pareto principle. The organizations with the top 10 dollar amounts (middle table in the image above) account for 72% of the $4,896,727 given. In other words, they awarded 2.5x the combined awards of the next 18 fraternities combined. No matter how you shake the numbers, it is unlikely that even a quarter of that $79 million figure is dedicated to academic scholarships.

Fraternities are often critiqued as tools of those with privilege to maintain said privilege. Student debt is a recurring theme in election-year politics, and candidates on every side of every aisle offer some plan to bribe indebted students for votes to relieve some or all of that debt. Why are fraternities so focused on funding leadership or educational programs with unclear or purely subjective results? Am I missing something? Wouldn't a concerted effort to reduce student debt be something that the public (and our members) could celebrate?

Just as I believe that foundations could improve their fundraising and impact by focusing on chapter funds rather than general funds, so too does it make sense that tackling student debt would do a better job of recruiting donors than a testimonial from a student saying that some educational program was "definitely worth it."

Student loan debt is a problem that both members and non-members are familiar with. Beyond that, it is important when considering the national debt of the United States (more than $2 trillion in student loan debt) and the future of higher education. Fraternities are not going to come close to providing a full ride for every student, but $79 million toward making college more affordable is leaps and bounds better than $5-$10 million.

Which of those two statements better appeals to potential members or donors - including those who've never taken part in a leadership program? Which better demonstrates the power of a fraternity's network to the outside world? Which makes colleges as beholden to fraternities as we are to them? (i.e. fewer blanket bans and tough talk)

My money (literally) is on statement #2.